Anti-Aging Medicine is Exercise with Oxygen

As a naturopathic physician for over 12 years I am always researching to find and implement new therapies that generate health and healing for our patients. The current state of anti aging medicine consists of hormone replacement therapy, laser treatments, botox injections, and collagen therapy. This type of anti-aging medicine reminds me of the Saturday Night Live skit: “Its not how you feel but how you look, and you look marvelous….” Skip to the following video to watch an anti-aging presentation by Dr Gary Gruber:

In this article we are going to explore one of the most important causes of physical aging and a therapy that effectively reverses the mechanism of aging.

Aging is a complex process of changes in biological systems that results in progressive decline in function and degeneration of one or more physical systems of the body.

Changes are observable as well as experienced: Changes in sensory experiences such as vision, hearing, taste, and smell. Changes in the skin and joints; changes in sleep patterns; changes in urinary and sexual function, changes in cognition and mood. Cardiovascular changes (heart, veins and arteries) and neurological (neuropathies and dementias).

Many people are told by their doctor that their symptoms are just the result of getting older, as though it should be accepted as fact. And while some people will buy into the getting-old program and stereotypes, others will look for alternatives to aging that reverse the signs and symptoms.

Cause of Aging is Lack of Biochemical Energy

What is the underlying cause of physical aging. Can the mechanism be reversed?

When we consider all of the factors that influence the aging process, there is one factor that consistently declines throughout life … Energy!

It is possible for cells throughout the body to make energy without oxygen. But the process, called anaerobic respiration is inefficient and results in a net loss of biochemical energy. Anaerobic respiration results in two molecules of energy or ATP but after considering the removal of waste products from the body which also requires energy, there is a net loss of four molecules of ATP. 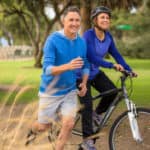 On the other hand in the presence of oxygen, that is called aerobic respiration, the cells make in excess of 30 molecules of ATP energy for each molecule of glucose, fat, or protein.. Aerobic energy production is efficient and effective and is the source of youthful vitality.  Oxygen is the critical factor. Without sufficient quantities of oxygen cells make energy inefficiently. Yet with every breath there is a vast supply of oxygen so why aren’t cells always making energy aerobically. It is because the delivery system has changed over the years.

It is well understood that the body fluids of a 50 year old contain less than 50% of the dissolved oxygen than the same person at 25 years old. In order for the cells to get oxygen, the oxygen must be dissolved in the fluids that surround the cells. This fluid, predominately water is outside of the vascular system, the system that carries the oxygen-rich red blood cells.

The fluid of the body is like a fish tank. Suppose you fill a tank with 10 gallons of water and put a dozen goldfish in the tank. What happens after a week?

The water gets murky is depleted of oxygen and the fish die. To prevent this condition you either need to replace the oxygen-depleted water or add a bubbler system that creates turbulence in the water. It is the turbulence that is necessary for oxygen to be dissolved in the water.

In the human body the only way to create turbulence in the fluids, like a fish tank, is to engage your own pump, the heart. We do this through exercise. When the heart rate is sustained above 110 beats per minute, or greater, such as a cardiovascular workout, the turbulence is created that promotes oxygen to dissolve into the body fluids.

Oxygen is not dissolved in blood but rather it is attached to hemoglobin within the red blood cells. But remember, the oxygen must dissolve in the fluids in order to be picked up by the cells.

There is only one effective way to reverse inflammation of the capillaries: oxygen multistep therapy.  Oxygen Multistep Therapy was first developed by Manfred von Ardenne, a German physicist in 1987 after years of research into the question of how to maintain good health in older age. Since then hundreds of clinics throughout Europe have reversed or slowed aging using this simple therapy of combining oxygen while exercising. 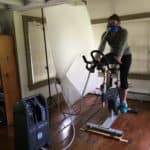 In 2016 Family and Environmental Medicine became the first clinic on the east coast of the United States to offer patients the most advanced system for oxygen multistep therapy, a system called LiveO2.  This advanced system that uses altitude contrast therapy has been clinically demonstrated to be more effective in LESS TIME than traditional oxygen multistep therapy, exercise with oxygen therapy, and hyperbaric oxygen therapy. In addition to reversing and slowing the effects of aging, LiveO2 has been effective in our clinic in treating chronic fatigue, fibromyalgia, high blood pressure, chronic lymphatic congestion, chronic infections and chronic Lyme disease.

Family and Environmental Medicine help patients with Holistic Solutions that support health and well-being.  Dr Gary Gruber provides private appointments for patients from around the country who seek health and healing  with Complementary and Alternative Medicine. The majority of patients are from the local area of southern Fairfield County (including Greenwich CT, Stamford CT, Darien CT, Norwalk CT, New Canaan CT, Wilton CT), Westchester County, NY, NYC, and Northern NJ. For personal questions about anti aging therapy and LiveO2, please contact us at (203) 966-6360.